Noh, a 650 years old tradition is one of the world's greatest treasure, still going strong against the test of time. On 27th of May 2019, I had another opportunity to watch Noh and Kyogen in Aster Plaza, Hiroshima City. This would be my third time of watching Noh and my second time of watching Kyogen. What's interesting is this time around I get to see both Kyogen and Noh at the back to back for the very first time. Previously I had watched Kyogen's 'Rokunin Jizo' or 'Six Jizo' performed by Mansai Nomura, one of the talented actor in Japan and important figure in the Kyogen tradition.

I am also glad that this time around I had the opportunity for the very first time to catch a performance by Houshou-ryu Noh school up close through the front seat; which is usually very expensive. My previous experience watching Noh performance is watching 'Funa Benkei' by Kanze-ryu (観世) school and 'Hagoromo' by Kita-ryu (喜多) school. It is worth to note that there are five Noh school other than previously listed which are Komparu (金春) and Kongo (金剛), each has its own speciality and uniqueness. It's easy to identify which school that they are in, usually it can be differentiate by the motifs of the fan used by the main actor that usually wears mask. Do note this next time if you have another opportunity to watch a Noh performance.

Although usually Noh and Kyogen nowadays performed separately, they have similar history in the past, which is why they have a similar acting discipline, which part you'd say? Well, my friend Rony from Costa Rica had the opportunity to attend this performance together with me and ask the very same question to which I answered,

"Look at the movement of their feet, it is very interesting that they have develop a unique skills of moving their feet to which it looks like they are gliding instead of stepping as they move about on stage."

And this is not an easy task as Noh performer had already been exposed and trained as early as 3 years old and they too performed at such an early age. Imagine that the life of a Noh performer is around 90 - 100 years old at the time of their passing, so almost a century old skills to acquire!

The huge difference between Noh and Kyogen is apparent in the story that they perform. Noh usually have a more serious story whereby Kyogen is usually a comical performance.

I had the rarest opportunity to experience the training back in February 2019 where I trained for four days back in Malaysia sponsored by the Japan Foundation Kuala Lumpur. My senseis at that time was Soichiro Hayashi and Hiroyuki Matsuno from the Hayashi family branch of Kanze school in Kyoto. It was not an easy task. No wonder this form of traditional theatre is then called 能 or Noh/Nou, which means skills or talent. Because it takes a lifetime to master the art.

I would like to tell you more about Noh as this is one my study as a PhD student in Hiroshima University, but I would save this for another time. In the meantime, do check out this website for information on this beautiful traditional performance art.

Pictures: me, my wife and my friend Rony attending Noh and Kyogen performance in Aster Plaza on 27th of May and the final picture is me during Noh masterclass back at the end of February this year in Malaysia. 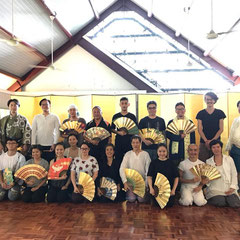 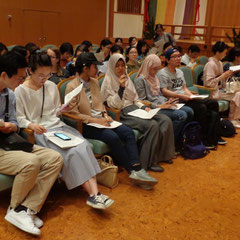